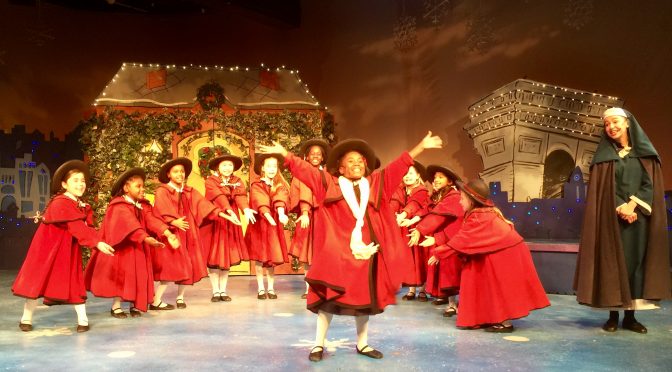 Bonjour! Como ta le vu!  A french themed play hit on the 3rd of December called Madeline’s Christmas. Critics {8 year olds}  have been calling it the best kids show ever.  Just ask the rug merchant, also the magician that helped them get home for Christmas.

My family and I love performances, especially musicals. When we learned that Morgan Wellons would be playing the lead role in the Red Cast, we couldn’t wait to see it.  Not to mention Morgan is a classmate of my 8 year old co-writer.  We knew she would be bringing her infectious spirit to the stage.

Madeline’s Christmas ticket prices are a  bargain for families compared to similar productions during the holiday season. $15 for Adults and $12 for kids and there is a discount for school groups and scouts.  There are lots of show times to select from and it runs through December 31st.

The show runs a little over an hour and is great for kids 4 and up.  If you have smaller children I suggest sitting closer to the exit incase you need to step out.  There are no scary scenes or flashing lights either, just great acting, singing, and a sprinkle of magic to keep the audience engaged.

Horizon Theater offers an intimitate setting and holds about 100 people.  We purchased tickets for the 6:30 evening show and arrrived just at 6:00pm for general seating.  The best seats are center stage but I’m sure any where in the theater offers a good view.

Concessions at Horizon have moderatly priced refreshments and baked goods you can take into the theater. Parking is free which is almost unheard of in Atlanta.  After the show we were able to meet the cast and take photos.  This was a real treat for the audience.

Madeline’s Christmas has made the holidays a wonderful time for us all!